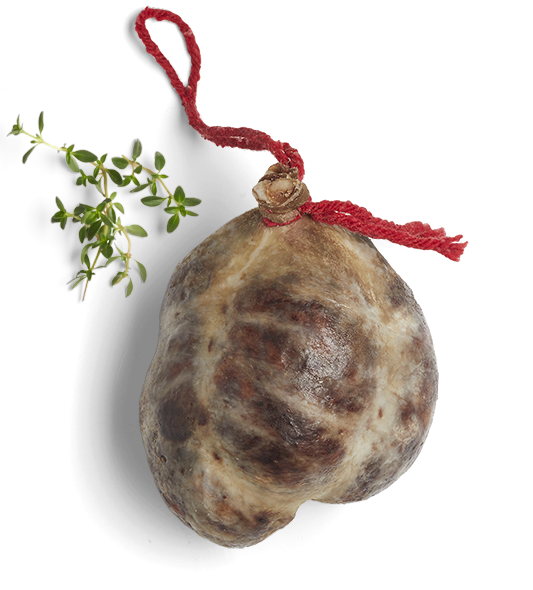 From our great-great-grandfather Sebastià to Eduard – currently the head of the business -, five generations have safe-guarded our traditional principles and techniques to produce Embotits Obach, maintaining the same quality and authentic flavour of the sausages and cold meats dreamed up by our ancestors.

The history of Embotits Obach is the inheritance of a land, a tradition and a family culture that has been evident in the artisan production of our sausages and cold meats over the last 100 years. The roots of this culture date back to 1850, when Josep Maria Obach, blessed by Sant Llorenç de Morunys, began to gain a reputation for producing a delicious sausage.

At the beginning of the 20th Century, this business, distinctly artisan and family-run, relocated to Pobla de Segur – in the old Hort de Cardós – with our great-great-grandfather Sebastià Obach i Ferrer and his son Damià Obach i Pujol at the helm. Soon after, in 1915, the drive and vision of our great-grandfather took the business to Organyà, a place where the climatic and environmental characteristics seemed ideal for dry curing sausages and meats. Our great-grandfather Damià was not on the wrong track. The cold and dry winters of Organyà are unarguably part of the excellence of Embotits Obach. And it is here, at the foot of the Valley of Cabó, where, at the beginning of this century, the legendary sausage of Organyà began to be produced, also known as the Culana.

In the 1930s, our grandfather Josep Obach and grandmother Pepita Oller, began to take the reins from our great-grandfather, not without setbacks. The factory was temporarily occupied by the military during the Civil War and the family had to survive during the complicated post-war years. However, the tireless determination of a woman ahead of her time, such as Pepita, and the thorough commitment of Josep, meant the business was able to move forward.

During this period the factory and the business were consolidated and in the 1970s the company began to receive true recognition. Our grandfather passed the baton to his son, Sebastià Obach Oller, an ingenious and overwhelmingly kind person who not only represented the fourth generation of the family, but also embodied the essence of all the virtues of our ancestors with the suitable strength to face modern times.

Sebastià was clear about what the distinguishing traits of Embotits Obach were: its exceptional products – unique – and its one hundred year legacy – authentic-. Among other achievements, Sebastià launched popular products such as the Longaniza de Montaña (mountain sausage) – which embodies these distinguishing traits -, in addition to opening, together with his wife, Jesusa, the iconic shop in the streets of Andorra, in the same village as Organyà, where Jesusa was the true heart and soul for many years.

The same entrepreneurial spirit of Sebastià can now be seen today in Eduard, who has been part of the business from a very young age and now heads Embotits Obach, together with his siblings. More than 100 years and five generations later, Embotits Obach continues making sausages and cold meats with a distinctive flavour that only years of experience can bring.

The essence of our character

ALL OUR PHILOSOPHY, STYLE AND TRADITION, EXPRESSED IN EACH MOUTHFUL.

If you spend over €80, for deliveries within mainland Spain only.

1–2 working days from receipt of the order.

We ensure the cold chain remains unbroken all the way to your home.

Implementation of local development strategies
Action of the Rural Development Programme of Catalonia 2014-2020, co-financed by